The Tandem Club of America was founded in 1976 by two teams of tandem enthusiasts on opposite coasts – California and Delaware – who wanted to provide a means to exchange information with other tandem owners throughout the country, find other tandemists, and share their enthusiasm with the uninitiated. Back in the 70’s there were not many tandems out there, and even less information about them!  And since tandems were much less mechanically reliable then they are now, and true tandem mechanics few and literally far-between, a means of communicating amongst this diffuse group – in the pre-Internet era – was needed.  A newsletter seemed like the best way, and costs needed to be covered in order to support the venture.  Hence the TCA and its hard-copy newsletter, DoubleTalk, roughly modeled on the UK’s Tandem Club and its newsletter, were born.

We had a couple of complementary goals in creating the TCA.  The primary goal was to provide a means of communication – not just from a few, but hopefully to create a dialog where many people were sharing their ideas and experiences.  We wanted information about tandems and tandemists to be as widely available as we could, consistent with not losing money on the deal.  Another was to create a sense of community among tandemists.  We had initially thought about creating a couple of regional tandem clubs on each coast, but we thought that we could aim a little higher, at a nominally national level, and if we ere successful there, the regional tandem clubs would follow naturally.  And they did.  A third goal was to create the Club and DoubleTalk altruistically, without an overt profit motive, and at the lowest cost consistent with a quality product.  So the initial 1976 annual subscription rate was set at $4.50, and all the work over the decades to maintain the club and publish DoubleTalk has been done by volunteer tandemists, except for the professional off-set printing services that we hired out.

DoubleTalk: and now for something completely different

In 2013, in the face of a continuing decline in membership and a turnover in volunteers, we decided that we were no more immune to the rise of the internet, and changes in technology than the newspaper industry as a whole.  One option available was to transform DoubleTalk into a professional niche magazine, raise prices, and go to slick paper, like the (now defunct) Tandem Magazine .  But we are not professional writers or publishers, and frankly, none of us aspire to become a magazine owner.  We’d rather ride our tandems!  A second, even more radical change in course was to transform the organization from its 37 year old business model, premised on the organization as a Club and subscription-driven membership that fueled the paper newsletter.  The transformation would result in an advertising-driven business model, dominated by a blog-and-website profile.   And that is what we have done, while striving to retain the parts of the TCA Club organization that still make sense.  That is why in September 2013 we stopped accepting TCA dues and membership renewals.  From this point forward, most of the content of the blog and website would be distributed free to all, fueled instead by advertising.  This, ultimately, is consistent with the original mission and guiding vision: to provide an effective means of communicating among tandemists, peer-to-peer, while minimizing cost barriers.  Discontinuing the paper DoubleTalk eliminated the largest single cost, printing and mailing expenses, and significantly reduced the workload imposed on the leadership team.  Once over the initial growing pains of establishing the blog and website, DoubleTalk publication becomes a push of a button, compared with the whole set of print-and-post tasks.

The switch to a blog format makes the publication of new information much more timely.  At its worst, the paper DoubleTalk could be as much as two months behind the times, which negatively impacted its calendar and classified advertising.  And the blog format also allows us to introduce a feature that we believe will become very popular: timely comments on the core blog articles. With the infrequently-published paper DoubleTalk, only the most determined readers commented on what someone else had written, because the comment could not be published any more quickly than two months later. This naturally stifled any real give-and-take, and resulted in a much less lively  and conversation. But it’s a natural aspect of a commented blog.

One additional change we are making at this point is to try to broaden the responsibility for editing DoubleTalk from a single team, to a small group of individuals. We believe this change will result in a greater diversity of voices and viewpoints, a greater diversity in the topics of interest and types of articles that are published, and a greater assurance of continuity.  Individuals and teams can go off on a cycling vacation and not worry about the ongoing and timely publication of the blog.  We are also hopeful that this ultimately helps address one of the Achilles heels of the TCA, which has had no viable means of succession of its officers and leadership team. When an organization is run for decades by a very small group of individuals, there is great danger when the time arrives to lay down the burden of responsibility. We hope that by splitting the responsibilities, particularly the responsibilities of blog editing across a number of individuals, the organization becomes less dependent upon any single individual.  Time will tell how successful we are in doing this.  But the issues of succession need to be addressed.  None of us is getting any younger.

This raises the question:  Why continue with editing the DoubleTalk blog? Why not just put up a blogsite open to anyone who wants to post?  Good question; after all that is the style of forums and listservers such as tandem@hobbes.  Well, t@h already exists and continues to serve its market and readers, and we do not seek to assume its niche.  DoubleTalk seeks to attract readers and writers who want to see a longer article, supported by photos, in a more modern format.  And we aspire to be a bit more authoritative.  As it stands now, anyone can write anything on a listserver so long as it doesn’t degrade into flame wars.  The information may be correct, partially correct, or mere opinion.  We aspire to be factual, technically correct, clear in communication and exposition, and where we include opinion, we want to be clear about differentiating that.

So what happens to the TCA?

So what part of the website isn’t going to be open to all comers? Well, the membership part. There are parts of a club organization that don’t need to be spread wide and far, like a club membership directory and information about its members. For many years we have tried to hold that balance by creating a membership list, publishing it only in paper format, distributing it only amongst the membership, and marking it as only for members use.  This worked very well. The natural path forward appears to be to continue to offer membership in the TCA, and continue to publish a membership list among us.  Going forward, we plan to do that electronically.  And, in all honesty, not all our ideas about membership have fully gelled. Of any aspect of the TCA and DoubleTalk, this is the area that remains in greatest flux. We have some plans for developments of an electronic membership section on the website, but decided not to delay the initial release of the DoubleTalk blog, tandem classified ads, and the tandem calendar pending development of the membership features.  We wanted to get these three basic functions out and available – articles, calendar, and classifieds  – as we felt that they represented the greatest amount of value to the tandem community, and represented the most public presence of the TCA and the paper DoubleTalk newsletter.

Through the years, TCA has been instrumental in communicating the existence of regional tandem clubs, and the rallies the regional clubs have organized for owners of long bikes.  Building from the original Eastern Tandem Rally held in 1973, there are now numerous regional rallies and many more state and local events for tandemists to choose from. While financially independent of the TCA, these rallies are heavily promoted and supported by TCA members. For a list of scheduled tandem rallies and other rides be sure to check out our calendar.

Finally, a few words about the people who have made this happen over the years. 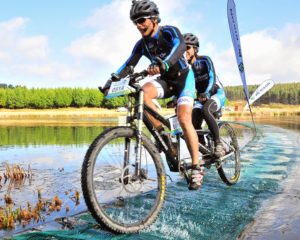 Carlos Garcia has taken the role of TCA Director to continue making TCA the central hub for tandem rallies, racing, mountain bike and touring, as well as adding a new mechanic’s corner and health section. TCA is a community supported group, so please feel free to submit your articles! Carlos Garcia has been riding, touring and racing tandems for over 10 years and recently added a triplet and off-road tandem to his riding repertoire. Pictured here Carlos and Sophie Garcia in 2015 at Joberg2C a spectacular 9 day/900 KM mountain bike race in South Africa. Jack and Susan Goertz have stood as mainstays of the TCA for longer than most teams have been in the sport. Taking over as editor of DoubleTalk in 1983, Jack and Susan have produced three decades – over 180 issues – of DoubleTalk. The team also owns and operates one of the first tandem speciality dealerships, Tandems Limited in Birmingham, Alabama. They have been instrumental in creating and supporting the Southern Tandem Rally as well, and are frequently seen at rallies across the nation. While stepping away from the editor’s role, Jack and Susan will continue to be involved with the TCA and DoubleTalk blog as the organization’s treasurers. Laura and Duncan McCabe at the 2012 Northwest Tandem Rally.

Having served as membership secretary for the Tandem Club of America for a number of years, Laura McCabe has stepped up to the role of General Editor of DoubleTalk.  Laura is familiar to many tandem rally-goers for her unbridled enthusiasm and cheerleading, while Duncan McCabe is an accomplished photographer.  Laura and Duncan are also veteran tourists with many national and international tours under their wheels.