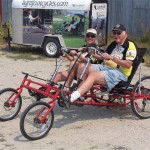 My wife, Anita, and I have been avid tandem riders for over 30 years. In 1984 we traded in our old bike for a new Santana. We got involved with independent tandem touring.  Our fully loaded bike included five panniers filled with 70 pounds of luggage.  In 1985 we rode across the Canadian prairie to attend my high school reunion in Manitoba.  Our adventures have included a number of tours including Netherlands, Denmark, Canadian Maritime Provinces, and many tours in California.

In later years we got involved with Santana tours.  We found the rides planned and supported by professionals offer more luxury for the aging riders.  With so many riders at these rallies it was always possible to find some one who rode at our speed so we had the added advantage of camaraderie.  We even thought about upgrading our 1984 model.

Guess we believed this would continue forever but [...]

Bicycle Storage in our New Garage

Recently, my wife and tandem partner, Mary Margaret, and I, Pat Flinn, decided that it was time to replace our old garage. Our home and garage had been originally built by Mary Margaret’s father, who was a contractor. He did this when she was just an infant, as a home for himself, her mother and their new baby girl. The home, the garage and its inhabitants have all graduated into the high maintenance category. The builder, Tallon Construction, that we selected had previously done a very satisfactory roof replacement for us, a couple of times. They followed our instructions and our town’s (Dearborn, Michigan), current strict building code. They did a fine job on the destruction of the old garage, breaking up the old concrete under the garage’s structure and the driveway. They also removed the old concrete steps leading up to the home’s back door. All of them had [...] 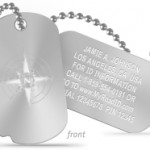 I know our membership in TCA has lapsed, but there’s something I’d really like to see in DT.

I don’t know if you’d heard, but we had a crash at MATES [Crash One] which resulted in some injuries.

The message for cyclists is this: I’d made a habit of carrying ID & insurance cards with me when I rode, and Marg happened to have her stuff with her as well. The ambulance crew and the hospital folks needed to see those things. I doubt that Road ID or similar stuff would be adequate. They wanted to see our driver’s licenses.

When we crashed, there were four other tandem teams right behind us, and they all stopped to help. Margaret overheard one of the riders commenting that they never carried ID & insurance cards.

I would strongly recommend carrying ID, insurance cards, etc., for [...]

Looking for a captain and tandem in Philly

My name is Ian Fleming. “I know — Great name”. I am suffering from “RP” [retinitis pigmentosa -Ed.] and have suffered all my life. I love riding and I love running ; however, my vision has deteriorated to the point where I consider myself a danger to myself and others on the road which, to be honest, is breaking my heart.

My question, if you can help, is: In the greater Philadelphia area, Lancaster, York (PA) or Cherry Hill (NJ) areas, do you know of anyone who has a tandem and is looking for a partner to ride with?  I just thought it might be worth a try. Anyone who has an interest can contact me directly via e-mail.

Teach a person to fish…

The Eastern Tandem Rally organization recently wrapped up its season of road tandem rallies with pretty successful MATES and ETR rallies, the rallies themselves the subject of possible future reports.  What I wanted to talk about here is the rash of incidents that resulted in three crashes and a near miss.  What the incidents have in common is an underpinning of mechanical issues.

In the first, a very experienced team had no sooner set off from the host hotel at MATES when the front tire on their recumbent suffered a blowout at speed on the hill in front of the hotel. In addition to a ghastly amount of road rash incurred by the pair, the stoker landed on her hip and fractured her femur.  The captain had just inflated the tire 15 minutes earlier in the parking lot to the correct inflation pressure. The brakes were correctly adjusted [...]

FARTing around for 20 years!

by Karen Managan on Dec 27, 2013 Add Comment in OffRoad, Rallies

WOW!… Who would have guessed when Chuck and Bonnie suggested we go to Allegany State Park in western New York to check out some mountain bike trails on the tandem that we would still be at it 20 years later? That first year was “interesting.” We got there first and got a campsite. They showed up well after dark, which was long after the skunk walked through…. we sat quietly and let him wander. It was a cold night, but the next day we rode the XC ski trails and decided it was a great spot, let’s do it again, and so the Fall Allegany Rally for Tandems (FART) was born!

The following few years we booked 3-4 cabins with only a wood stove for heat, running water outside and pit toilets within walking distance. Nevertheless, we had several couples attending every year. Then we found out about Camp Allegany…….kind [...]

by TCA Editor on Nov 1, 2013 Add Comment in DoubleTalk

These files are PDFs of the printed DoubleTalk for the year 2013.

Seven teams of intrepid cyclists from central and northern Indiana participated in a two-day ride to Fairborn, OH for the annual Midwest Tandem Rally. The riding started on Wednesday from the Fort Wayne area with Kevin & Peggy, their daughter-in-law Lindsay, and grandson Levi (age 4) heading south to Muncie on the Cardinal Greenway.  On Thursday morning, Don & Chris started from Muncie and three additional teams started from the Indianapolis area. These three teams (Pat & Margaret, Bill & Cris, and John & Madelyn) met at Losantville, IN, and by complete chance, also met up with the Fort Wayne crew heading south to Richmond, Indiana on the Cardinal Greenway. The Fort Wayne group preferred to stay mostly on trails to accommodate four-year-old Levi.  As four teams arrived in Greenville, Ohio, the final team, Mark & Karen started their ride from the east side of Indianapolis late in the afternoon. [...]

What About Our Subscription?

As you know from reading Malcolm Boyd’s editorial, based on input from our recent survey, Tandem Club of America is ready to make the transition to web and possibly email-based communications with our members.  Our Club is very fortunate to have had so many loyal, dues-paying members over the years.  Thank you again!  Your past dues, and, hopefully, your current goodwill, will allow us to finance this transition and seed the TCA’s future operation.

This [was originally printed in -Ed.] is the second-to-last hard copy issue of DoubleTalk you will receive.  The last issue will be Jan-Feb 2014, to be mailed right before our postal permit expires at year’s end.

We are changing our business model.  The Club’s new website will be, substantially, open to all; future financial support will come from advertising revenues rather than member subscription dues.

Next Steps for the Tandem Club of America and DoubleTalk

Well, it was a very interesting month as we absorbed and analyzed our reader’s survey feedback on potential changes to the Tandem Club of America and our newsletter, DoubleTalk.

Three different issues need to be addressed, ultimately, to return the TCA to a successful path:  a sustainable business plan, a path forward for its primary means of communication, DoubleTalk, and a means of succeeding and replacing officers and volunteers.  And the three are inter-related, of course.  For the time being, we have set aside the issue of officer succession (and hence ensuring the organization’s longevity) of the TCA and DoubleTalk.  But the clock is ticking; none of us is getting any younger!  We will need to return to this in the future.

After a lot of discussion and reflection, the consensus bottom line is that converting DoubleTalk to a multi-editor, commented blog, imbedded in a fully featured TCA website [...]