We received the following email:
My name is Rachel and I volunteer at a youth center with a safety program for kids. I came across your website while discussing cycling, bicycle safety, and the importance of protecting one’s head. I want to say thank you!

One of my girls, Lisa, did some web searches at home and found this page that she brought in for me to see

I suggested that she share this with you because it had such great information and I also want to impress upon all my students that by reaching out and simply asking others, like yourself, things can be accomplished that the girls might not otherwise think can.

Would you please add the link to that resource for them to your web page? They would be so proud to see that you included it. I also don’t think it hurt that I [...]

We received the following message from Tracy & Alexa Edward:
“I just wanted to shoot you a quick email to say thank you on behalf of my daughter Alexa. She just joined an 8-week long Youth Cycling program for 8-12 year olds that is starting up next week. She’s really excited about it and we just bought her a new “big kid” bike with 21 gears for her birthday 2 weeks ago to start the program off right. The instructor sent home some preliminary “homework” to get the kids started off right for their first class – to research cycling basics and safety and bring what they learned to their first class to share. Alexa came across your Tandem Club page https://tandemclub.org/resources/ and it’s been such a great help to her in preparing, so we wanted to say thank you!

Since your page was so helpful to her, Alexa [...]

Adventures Beyond Barriers Foundation (ABBF)is a non-profit based in Pune, India. ABBF promotes inclusion through adaptive adventure and outdoor sports for persons with and without disabilities.

In 2016 ABBF began its flagship event: an annual inclusive tandem cycling expedition called M2K: Manali to Khardung La, the first and only one of its kind in India. Tandem teams will ride to the top of the highest motorable road in the world. This year’s rides will occur August-September 2019.

The 2018 event was captured in a short film titled ‘Beyond Khardung La’ which won the Viewer’s [...]

Tandem Bicycles – either you love them or hate them?

Tandem Bicycles are niche.  Non-tandemers look at tandems as if they are a novelty, or something that reminds them of a picnic, but not anything for them to try or do.  I have to admit, it took me a minute before I even thought about riding a tandem.  I had the easy excuse of “I don’t know where to find one to ride.”  My husband owns a bicycle shop (and has now for 10 years), and they have a tandem.  Still I gave excuses.  It’s true, I’ve never ridden on a tandem.

It wasn’t until my husband invented a bar that connects two bicycles, front to back to form a tandem, I would have never really known the experience of riding tandem.  Now, I’m hooked!  This bar, buddybar as it is named, is essentially the same concept as a tandem bicycle, but is different than a classic tandem bicycle in [...]

A great article about tandem cycling

Check out this great article about tandem cycling!  You may know some of the devoted tandem cyclists mentioned and pictured in this article!

You can also read the article by visiting the Desert Leaf Magazine website at http://trendmag2.trendoffset.com/publication/index.php?i=440784 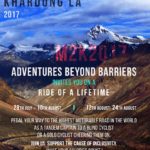 I am Tanya from Adventures Beyond Barriers. We are a not for profit organisation based in Pune, India that promotes inclusion by enabling people with disabilities to participate with able bodied people in adventure sports. This year in August we will be taking 10 pairs of Tandem Cyclists along the 550 km ride from Manali to Khardung La, i.e. the worlds highest motorable road! See here. Would anyone from Tandem Club of America be interested in joining us? For more  information, read here:  20170404-for-TCA-post.pdf Tanya Ginwala

Our Adventure in France

Have you ever heard of The Moth? The Moth is a nonprofit organization dedicated to the art of storytelling. Moth shows have a theme and storytellers get up and tell true stories without notes to a live audience. The Moth produces more than 500 live shows each year – mostly with ordinary people, although some of their shows are more produced. The Moth has a podcast and radio show on NPR.

A few years ago, Caren and I won the opportunity to choose the theme for a Story Slam. We chose the theme “In Tandem.”  A Story Slam is a show where people who want to tell a story put their names in a hat and ten names are picked to tell their tales.

Caren decided to exit her comfort zone and tell a story at the Slam. Her name was picked and she told a story [...]

TCA is a club member of the The League of American Bicyclists, founded in 1880 and committed to “creating a Bicycle Friendly America for everyone.”

Peddling Round the Puget Sound – NWTR 2017 in Seattle

by Sheila Hoffman on Jun 9, 2016 Add Comment in Events, Rallies

The Evergreen Tandem Club is pleased to announce that the 2017 Northwest Tandem Rally will be hosted at the University of Washington in Seattle next summer, June 30-July 4!  Our website is UP and registration is OPEN!  You can sign up now to take advantage of the Early Bird rate of just $95 per rider!  Don’t wait, as rates will increase after July 15!

We have a fun-filled weekend plan that will begin on Friday evening, June 30th, with a bus trip out to the Velodrome at Marymoor Park in Redmond to watch the cycle racing.  Saturday, July 1st, will begin with an unsupported ride on Bainbridge Island and the Kitsap Peninsula.  That evening, we will have a kick-off barbeque on the lawn outside the Husky Union Building (aka “the HUB”) on the University of Washington campus where we will be hosting the rally for the weekend.  The HUB was completely [...] 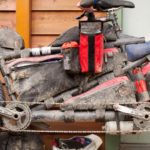 The online Bikepackers Magazine recently posted an article on off-road tandem touring that will speak to the more adventurous teams out there.

Check it out at: