The 2014 Midwest Tandem Rally (MTR), the largest tandem gathering in the U.S., will be hosted by CIBA/HOOTs (Hoosiers Out On Tandems) in Fort Wayne, IN over Labor Day weekend.  Kent and Anne Ellis will lead the team expecting to host about 400 teams from around the country.  It’s an impressive sight to see that number of tandem teams for the Saturday and Sunday mass starts. The rally will be hosted in the Fort Wayne Downtown Hilton hotel. With many dining and entertainment venues in the downtown area, you’ll be able to park your car on Friday and not get back in until you leave on Monday.  The Friday ice cream ride and Monday breakfast ride will follow Fort Wayne’s extensive Greenway trail system (over 60 miles of trails!) with routes of 20 – 25 miles. On Saturday and Sunday, the mass starts will be escorted out of town by the FWPD to follow routes on scenic northern Indiana country roads.  Saturday and Sunday routes will have options of 30 – 70 miles with multiple SAG stops and lunch provided for all participants.  In order to make MTR a family friendly event, the rally is offering free registration for all riders 12 and under, as well as reduced rate of $5.00 for the Sunday banquet. Reed Steele will provide the entertainment at the Sunday evening banquet in the Grand Wayne Center. If you were at the MTR2010 banquet, you’ll remember Reed. Be sure to join us to see his hilarious tandem cycling team skit as well as his other terrific skits. Hoosiers have been hosting MTRs for nearly 40 years.  The first MTR was held in 1976 on Labor Day weekend in Kokomo, Indiana, with 35 teams attending.  The event was hosted by Mont and Pam Williams along with the Kokomo Wheelmen.  The event was actually called “Midwest Tandem 76,” and was patterned after “Tandem ‘75” which was billed as the “National Tandem Rally,” but actually drew mainly people from the east coast.  Three days of riding included a 40 mile tour of Amishland, a Wabash River Valley century, and a 60 mile tour to the Mississinewa reservoir and Peru.   At Sunday evening’s banquet, the formation of the Tandem Club of America (TCA) was announced. Anderson was the second Indiana stop for MTR.  In 1985, Wayne and Phyllis Shirey with the Delaware Cycle Club, and Bruce and Beth Bailey hosted the tenth annual MTR.   Saturday’s ride went to Elwood, the boyhood home of Wendell Wilkie, where a glass factory was visited.  Sunday’s ride went to the 1836 village at Conner Prairie where lunch was served.  Monday’s ride went to Mounds State Park, home of the Adena people from 1000 B.C. to 200 A.D. MTR returned to the north side of Indianapolis in 1995.  “Back Home Again in Indiana” was hosted by Keith and Janice Conaway with T.O.I.S. (Tandems of Indiana Society). 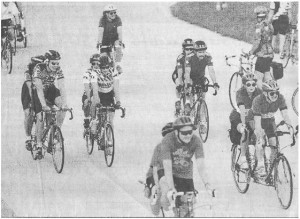 Teams rode around the Major Taylor Velodrome on Friday night, and routes included trips to Zionsville and Lebanon.  Entertainment was by cyclist Reed Steele who is well known for his performances at the Hilly Hundred each fall. “Different by Design” is the trademark of Columbus, IN and it became the theme for the rally in 2004.  Don and Dolly Craft, Charlie and Diane Zaharako, and HOOTs hosted the event.  Saturday’s routes went to Anderson Falls and the town of Hope.  Saturday ended with a free concert and fireworks.  Performing at the concert was Davy Jones, formerly with the Monkees.  Sunday’s route ventured into the hills of Brown County, passing by Grandview Lake, the Story Inn, and the Spears Gallery. 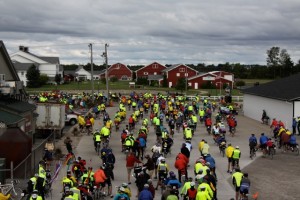 In 2010, MTR traveled north to Shipshewana, a town of 658 people in the heart of Amish country.  This small town size allowed very short transit zones into the quiet roads of northern Indiana.  Don and Dolly Craft, Danny Graber and Rhonda Yoder, along with HOOTS, hosted the event. “Ride to a Slower Pace” featured a Saturday lunch provided by an Amish family, and Sunday’s route went past Shipshewana Lake with a loop into Michigan.

Come and join us this Labor Day weekend in Fort Wayne for some great riding and fellowship with other tandem cyclists.  June 15th is the last date to order jerseys, and the registration fees goes up as well; be sure to sign up now!  For more information, go to www.mtr2014.org.