We flew to Geneva three days before the tandem cruise started to acclimate, prepare our tandem and participate in the pre-tour activities. On Tuesday, we walked around Old Town and the city lake (Jean’s forced marches to get us adjusted to the local time) and learned how to use the tram and water shuttles across the lake. By evening, we were exhausted and managed to sleep until 6AM. Over the next two days, our pre-tour activities included a delicious perch lunch on the lake, a Swiss fondue dinner (sliced potatoes baked with cheese sauce) and Alpen horn music at the Edelweiss Hotel, watching chocolate making at the Plettler Chocolate factory, eating chocolates to our hearts’ content, and admiring the nearly 500-foot tall water jet in the Lake Geneva. We also did two flat but scenic 30-mile rides along Lake Geneva that lulled us into thinking that the tour would be relaxing. As usual, we planned too much and missed the United Nations Tour by a couple of minutes; the Swiss guards were mercilessly punctual and directive.

After buses dropped about 20 tandem teams and our bicycles off in Oyonnox at noon for the long ride, we hurriedly prepared and headed off under a bright sky surrounded by the Jura Mountains to begin our 74-mile ride. Our destination was Tournus on the Saone River where we were to embark on the river ship Amadeus Symphony for our week’s bicycle tour to the Mediterranean Sea. At first, we enjoyed the long downhill, but the temperature and climbing both increased significantly. 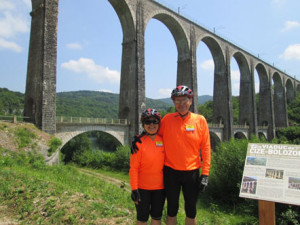 The impressive Viaduct Cize-Bolonon across the River Ain.

Crossing the Ain River on a high, old, double-decker stone arch bridge was exciting and scenic, but this was followed by an immediate pay back: a long 3-mile steep ascent away from the river bottom. By the time we arrived in Tournus and the ship about 6PM, we were tired and thirsty and happy to embark.

Overnight the ship had moved up river to Chalon-sur-Saone. Our cycling destination for the day was Beaune for market day and for tours of a hospital-museum and a winery. The weather was decidedly hot in Beaune so we indulged and sipped unlimited quantities of Burgundy wine in the cool caves of the Patriarche winery. Finding our way through the crowded, old part of town with its cobblestone streets was a little challenging, but overall the 47 miles on rolling terrain were not too taxing.

Our ride leader Bill McCready instructed those planning to climb Mount Ventoux on Tuesday, July 16, that they needed to do the long 75-mile ride: 36 miles with 2,500 feet of climbing in the morning and 39 less hilly miles in the afternoon. The views were as great as the climbing and the heat were intense. Our destination, Lyon, a major city at the junction of the Saone and Rhone Rivers, provided us opportunity to snack on cheese and sausage and to cool off with a pint of Kronenbourg beer, France’s #1 best-seller, while we waited for the Amadeus Symphony to arrive. After dark and another delicious dinner of soup, salad, main course, dessert and cheese-fruit plate, we had a front row view of the impressive fireworks display in honor of Bastille Day. The ship was docked between two bridges crowded with spectators for the fireworks fired off in between.

Monday was supposed to be a more relaxing day, resting up for Mount Ventoux on Tuesday. However, the 46-mile ride started with stiff climbs up to the beautiful Stone Village and even more up to the high but scenic Pelussin Tramway Bridge. In late afternoon, Dennis Coffman, “5-foot-20-inch” rider and mechanic on the tour adjusted our derailleur, ensuring that all was set for Ventoux. After dinner, Bill, our tour leader, reminded us that in the 1967 Tour de France, competitor Tommy Simpson died of heat exhaustion near the top of Ventoux. Many of us went to bed a bit somber, nervous but excited.

The big day for Mount Ventoux arrived! Despite Bill’s warnings, the tough, hilly training rides of greater than 70 miles, and warning talks (the 16-mile climb can kill you), 22 tandems out of 75 total were loaded on the truck and their riders on a bus for the village of Bedoin at the base of Mount Ventoux. The weather was hot, humid and uncomfortable on the flat. Although this was two days after the Tour de France riders cycled up Mount Ventoux, a steady stream of single riders were bicycling up. Many of these riders were cheered on by family and friends in cars which followed their riders and stopped along the way to offer water and encouragement. Because tandems were uncommon and attracted a lot of attention, the spectators enthusiastically cheered us all on; quite an event.
We stopped briefly a couple of times at about the 5 and 10 mile points, mainly to drink. We were dripping wet. From the 10-mile point on, with no level spots, we were afraid to stop least Don might have trouble getting his feet secured properly in the toe clips. The top third of the Mount is above tree line, bare white limestone for the most part. Near the top, for fear of stopping on a steep pitch, we rolled past the memorial to Tommy Simpson; Jean squirted some water for him. We kept going and made the summit in 3 hours 22 minutes and 46 seconds. Having consumed most of our 5 bottles of water, we were pleased to see Jan McCready and Garmin Gene Mezereny offering cold water, chips, and M&Ms. All 22 tandems made it up the 16-mile climb, including a couple on their heavy Bike Friday tandem. This was in contrast to the previous Santana tour when 15 tandem bikes started up and only 11 made it. 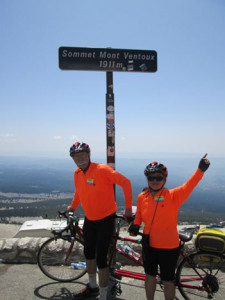 Don and Jean top out on Ventoux.

After photos, congratulations and exhilaration, we prepared to head down, understanding that steep, long descents are challenging. On tandems, a fear in long descents is that overheated brakes can fail and cause the tires to blow out. With our third drum brake, we were relatively confident our brakes would hold. Nonetheless, we stopped a few times to make sure the brakes were cool. Unfortunately, six tandem teams had brake failures on the descent and one team stopped at the top. All seven teams were ferried down by Jan and Garmin Gene. Even after a safe descent, we still had over 40 miles to go in the heat before reaching Avignon. The temperature had risen from 80F on top to 100F on the flat. But Bill’s boot camp of two very hard rides and scary talk had prepared us well to climb, descend, and finish a memorable 57-mile ride!

From the Rhone with another remote start, we rode to four of the renowned hilltop Luberon villages of Provence, starting in Gordes and down across a valley before climbing up to Roussillon, then Menerbes, and finally Lacoste. Cherries and many other fruits were in season so we gorged on very large, sweet cherries and had a hard time leaving the beautiful village of Gordes. Although the 26-mile ride was relatively short, it was not the easiest because we had to climb up to each village and then had to descend to leave. Near the end, we luckily outran a thunderstorm and arrived at the Lavender Museum for a late box lunch. A tour guide then showed us how essence of lavender is squeezed and finally distilled from the flowers. Upon our arrival back in Arles, we quickly put our tandems on the ship and went immediately in our biking clothes to the Roman Coliseum to watch horse and bull games that celebrated the local tradition of minimal restraint of animals. The white horses ridden by the farmers, women, and children apparently were caught from the wild herds in the Camargue (delta region of the Rhone).

From the Rhone, we headed for the famous Saint Remy de Provence to take in Roman ruins and van Gogh. The Roman ruins of Glanum, dating from 100 BC and a regional capital, are extensive and include victory arches, Roman baths, and dwellings. Adjacent to the ruins are the grounds of the hospital where van Gogh spent 1 year and 1 month and 1 day, according to our guide. Despite a difficult life, van Gogh worked intensely, doing more than one painting a day throughout his stay in Provence. Upon his return to Paris, he committed suicide. The hospital is still in use, but, in honor of van Gogh, copies of his paintings are well positioned at the sites where he painted them and comments and explanations are provided. The whole experience of the tour and seeing the locations where his paintings were done was fantastic. This was the cultural highlight of our trip.

From Saint Remy, we climbed and pedaled on to Les Baux over a mountain ridge where we found a medieval castle complete with operational weapons such as catapults and trebuchets that can fling 200 lb stones over 200 yards. Les Baux is the source of the bauxite first used as an ore for aluminum. On the way back to the ship, we stopped at a local olive mill for a tour and tasty tasting of a variety of olive oils. Concluding the hilly 39-mile ride, we were back in Arles.

We bicycled out of Arles through narrow alleys and made our way to the Rhone Delta National Park known as the Camargue. Our destinations were the Mediterranean Sea and Port St. Louis. Along the way, we saw beautiful beaches and marshes, pink flamingos and wild white horses. We even took a free ferry to cross the Rhone. For the first time, the terrain was flat and we had a tail wind. After reaching the beach and seeing the Mediterranean Sea, we back tracked to Port St Louis where the ship picked us up. After lunch, we broke the tandem bike down and packed everything for our trip home. The 48-mile ride was our easiest day and brought our trip total to 470 miles.

We woke up very early to disembark and leave France via the Marseilles airport.

Would we do this Santana ride again? Despite all the hills and hot weather, we really enjoyed this trip so our answer would be: Yes, of course! In the spring or the fall, but not in hot July!

Don was raised in West Michigan, graduated from Kalamazoo College and Michigan State, taught at Dartmouth for 14 years where he met and married Jean. Jean was raised in Massachusetts, graduated from Simmons and Dartmouth. Both left academia (Jean was at Harvard) and moved to the National Institutes of Health more than 20 years ago where they have since served the health research grant community and enjoyed tandem bicycling and friends.

One Response to "Hot times in Provence"