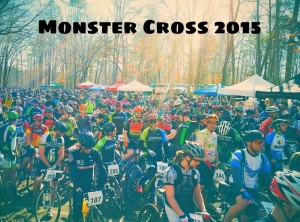 Monster Cross 2015 was a great early season race for tandem enthusiast.  This year event was postponed by two weeks due to weather conditions and was held March 8th at Pocahontas State Park, in Chesterfield VA, about 20 minutes south of Richmond, VA.  For us, this meant a 4 and a half drive down from Philadelphia, which was worth the effort finding much warmer weather and a snow-free environment. 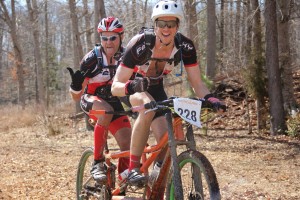 The event included 5 tandem entries, however, only 4 showed up.  Two of the tandems were full suspension Ventana ECDM, one was a hard tail Seven and a Cannondale setup for cyclo-cross.  One of the Ventana tandems was ridden by two pro-riders captained by Tim Kelly, which raced in the professional/elite group.  The other 3 tandems raced in the amatuer group which started a few minutes behind the pros.

The weather was perfect.  We started with temperature in the high 40’s and rode mostly in the 50’s with a beautiful blue sky.  The course was in good conditions with some sections of mud left over from the recent storms.  The mud certainly made the race tougher and slower but it was rideable even on the tandem.  There were also sandy sections but not deep enough to make it treacherous.  There were some roots and rocks but none of them presented a problem on a hazard.  Most of the course was laid out on wide track walking/horse paths or doubletrack where 2 or 3 bikes could ride next to each other giving tandems plenty of room to maneuver.  A few single tracks sections were sprinkled along the way but these too were tandem friendly. 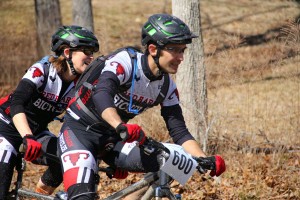 The course had many hills, but not none of the hills were particularly long.  Most were in the range of 50-150 feet, which allow tandems to maintain a reasonable speed over the course.  We also crossed over two crystal clear creeks which were refreshing and fun.

After the race we were treated to buffet style lunch which included Lee’s Famous Recipe Chicken, mash potatoes, macaroni and cheese, salad, baked beans and biscuit.  All racers also received a Monster Cross t-shirt and an engraved pint glass. 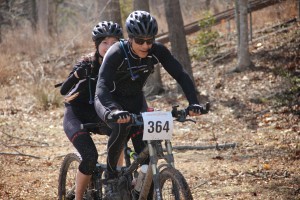 For us, this was our first race and ride this year and a great way to start the season.  The race was challenging but friendly enough for tandem enthusiast as a first race and a good way to start training for the new season.  We certainly enjoyed the race even if we ended up with aches from not having put any miles on the bike for the last 3 months (winter doldrums).  Coming back to the Philly area was a little disconcerting since there were snow covered fields once again.  Looking forward to warmer days.

Carlos Garcia has been riding, touring and racing tandems for 15+ years and has recently added a triplet and off-road tandem to his riding repertoire. Carlos has taken the role of TCA Calendar Editor to expand our reach to broader events while still remaining tandem focused. We will be covering the typical tandem rallies and adding more racing, mountain bike and touring/club rides to the calendar. Our previous calendar in Double Talk had limitations been a printed publication, now our web site can filter by Event Categories to help users focus on just the Events that they want to see. The Event Category filters are quite powerful and can gives us the best of all worlds – a richer community without losing focus.