Sure enough, when I returned I found my buddy Bill Morris standing there holding the Calfee with a chagrined look on his face. Not only had the tandem rolled back and fallen over, it fell against the post and dinged the captain’s top tube. My only consolation was the Calfee had already collected several dings and scratches from tours and dis-assembly, packing and reassembly during eight seasons of travel and was already in need of a cosmetic make-over.  So, we recently packed up Pinot Noir and sent her home to Calfee Design in La Selva Beach, California to have the ding repaired and the frame stripped and repainted.

All this got me thinking: why does a bike, standing still, suddenly move or fall over on its own? What makes it more or less likely to occur?

In my search for the mechanics behind the “why” part of my questions, I turned to David Gordon Wilson’s Bicycling Science, 3rd edition wherein Figure 8.8 (below) seemed to provide my answer.  The illustration reduces a bike’s steering and geometry to the bare minimum and further simplifies the model by reducing the wheels to what Wilson calls ‘zero-radius points’.  In the accompanying text, Wilson assures readers we can make this simplification without invalidating the concept, and it really helped me to visualize what happens when a bicycle wheel turns. 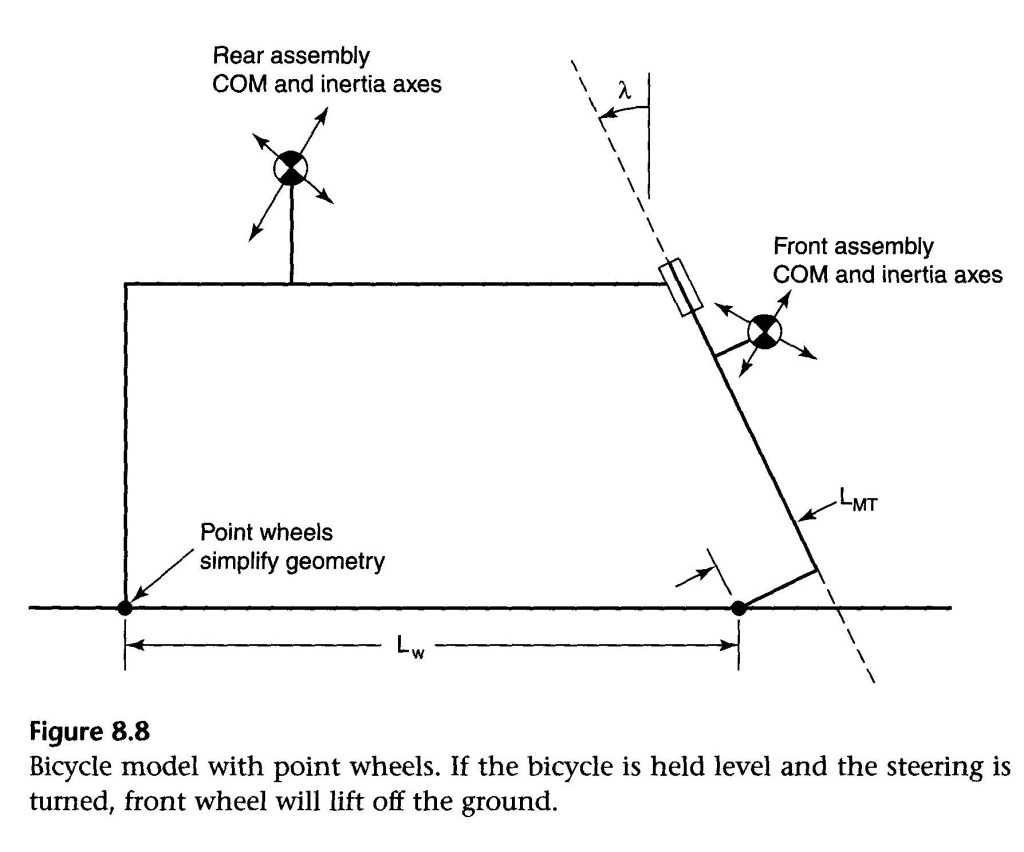 In Wilson’s model, the point where the typical bicycle wheel contacts the ground sits behind the steering axis, or more technically speaking it “trails behind” the steering axis.  Therefore, as you steer this bicycle model’s front assembly to the left or right — while also keeping the imaginary top tube (rear assembly) held in a fixed position —  the front “point wheel” is lifted up and away from the ground.  Looked at another way, imagine the L-shaped steering assembly labelled LMT being turned to the right, towards you the reader. With the top tube held in position, the point-wheel attached to the end of the backwards L-shaped steering (front) assembly would move away from you and also be lifted up above the horizontal line as it turned.

In the real world the top tube of a tandem is not held in a fixed position and gravity kicks in.  Therefore, when a tandem is steered the top tube moves just a bit closer to the ground as the wheel “flops” to the left or right, remembering that the point where the wheel touches the ground is behind the steering axis not in line with it.  So, when you lean a tandem up against something with the front wheel aligned with the frame, the front wheel will always want to turn if there’s any rearward movement, and it doesn’t take much to make that to happen.  All it takes is the stored-up potential energy of the parked tandem (i.e., its weight/mass) reaching a point where it can be converted to kinetic energy as it overcomes any friction keeping the front and rear wheel from rotating and that front wheel IS going to turn. Interestingly enough, when that wheel turns the tandem is going to move laterally and/or horizontally.  If that tandem happens to be parked against a post facing up hill when the wheel turns, it may move backwards just enough to allow the stoker’s handlebars to move off that post they were resting against and then bad things can happen.

By the way, although it is initially counter-intuitive, if you are parking a tandem on a slope, it is better to park the tandem facing downhill.

Tech Note: Bike designs are optimized for forward movement, not to go backwards.  When they move forward, the front wheel tends to track relatively straight unless the bike is tilted to the left or right… some more so than others, but it’s all relative.  However, when they move backwards the front wheel will almost always turn to one side or the other unless it’s perfectly aligned with the frame, absolutely vertical and moved in a straight line.  It’s the steering geometry and  trail that controls this.  Moreover, when a bike or tandem’s front wheel is lower than the rear wheel the front wheel’s contact point moves closer to the steering axis which makes the bike less prone to wheel flop. When a bike or tandem’s front wheel is higher than the rear wheel, the opposite happens… steering trail is increased and wheel flop becomes far more pronounced.  So, as noted, if a tandem has to be leaned up against something and parked on a slope, you really are better off pointing the front wheel facing downhill, not up.

Several of the tandems I’ve owned exhibited wheel-flop induced reverse gear.  In my experience it’s been more of a problem with my touring tandems than it is with my club racers. Perhaps it’s because if space is available I tend to lay my club racers on the ground (always derailleur side up) since a tandem laying on the ground can’t fall over!  However, with a touring tandem you really can’t get into the panniers with the bike laying on the ground, so the natural tendency of the touring tandem captain is to park it upright.  Interestingly enough, the natural tendency of the touring tandem is to flout upright parking.  After all, everybody knows touring tandems have their own peculiar and independent personality; that’s what makes them good tourists!

With my understanding of touring tandems and their contemptuous behavior, some years ago I’d taken to carrying along one or two extra toe straps.  Yes, toe straps; remember them?  It turns out they work really well when you need to secure a parked tandem, they are light to carry, and they are flexible to meet many situations.  You can use them to:

Another  way to park a tandem upright is to nest a post inside the stoker’s drop bars, typically with the heel of the captain’s saddle resting against the post.  The captain’s crank on the post side is rotated aft so the post and the pedal are as close as they can be.  This effectively wraps the tandem around the post.  Effective for small trees or sign posts, it also allows you to stand the tandem up nearly vertically, since it can’t fall to either side.  It’s also very effective when combined with a toe strap restraint.   The posting technique has gotten a little less effective as pedals have diminished in size, but I’ve never seen a tandem fall over using this technique.  Also, you can even buy extra-long toe straps these days if you shop around, the longer ones are helpful to reach around slightly larger poles or railings.  I prefer leather toe straps which don’t scratch anything and are easy to snug down and release.

Before closing, I thought I’d share an illuminating conversation I had with Calfee Design’s frame repair guy, Richard Sullivan, regarding headsets and dinged top tubes. Richard noted that he repairs a lot of top tube dings and a  lot of those bikes are equipped with Chris King headsets, including ours.  One of the things that have made Chris King headsets so popular was their early adoption of  incredibly smooth-rolling, high quality sealed bearings which make them nearly impossible to false brinell-dent (ie  a dimpling of the headset race due to improper adjustment, or inferior metallurgy).   So, at least from Richard’s perspective, it could be that Chris King equipped bikes with their silky-smooth, effortless steering may be even more prone to wheel-flop induced reverse gear.   Talk about unintended consequences of top-notch components!  Richard speculated that preloading the bearings might slow ‘em down, but we both agreed it would be easy to damage the headset this way.

Tech Note: A few other suggested ways to keep your tandems from moving when parked would include:

One Response to "Reverse Gear"